The Compilation of Multilingual Concept Literacy Glossaries at the University of Cape Town: A Lexicographical Function Theoretical Approach

This article proposes a lexicographical approach to the compilation of multilingual concept literacy glossaries which may play a very important role in supporting students at institutions of higher education. In order to support concept literacy, especially for students for whom English is not the native language, a number of universities in South Africa are compiling multilingual glossaries through which the use of languages other than English may be employed as auxiliary media. Terminologies in languages other than English are developed by translating English terms or coining new terms in these languages to exploit the native language competence of most students. The glossary project at the University of Cape Town (UCT) which was conceived under the auspices of the Multilingualism Education Project (MEP) is discussed. It is shown that the UCT glossaries are compiled using methods consistent with those employed in modern lexicography or proffered in lexicographical theory. The lexicographical function theory is specifically used to account for the glossaries and their production. It is suggested that modern lexicography can provide useful guidance for the production of glossaries, given that the earliest glossaries constitute the humble beginnings of lexicography. 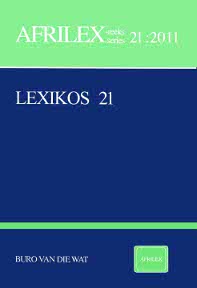